The Killing of a Sacred Deer (2017) Yorgos Lanthimos

Directed by The Sacred Egg

Guillebeau, Chris. The Happiness of Pursuit: Finding the Quest That Will Bring Purpose to Your Life. New York: Harmony Books, 2014. Print.

“If I made a list and worked on the list, a big goal–even a huge goal–seemed feasible.” p.24 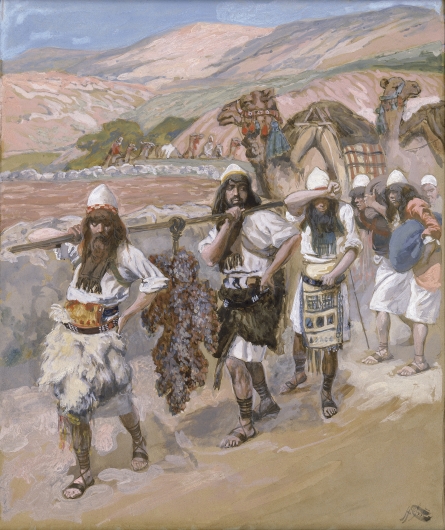 The Grapes of Canaan (c. 1896-1902) by James Tissot. Although the spies brought back a cluster of grapes so large that it took two men to carry it (Numbers 13:23), only two of the twelve brought back a good report of the land.

Story in the Torah about the 12 spies investigating the land of Canaan. p. 39 (from the Book of Numbers)

“When a person is really happy they don’t have to tell people about it. It just shows.” p. 45

Amelia Earhart might have put it best: “When a great adventure is offered, you don’t refuse it.”” p. 49

“In the words of a great Bob Dylan song, “He not busy being born is busy dying,”  and perhaps some of us are busier than others.” p. 58

“As much as it sounds trite to “live like you’re ying” or “live every day as if it were your last,” that’s exactly what many people obsessed with a quest do.” p. 58

“John wrote in his journal: “How interesting it is that men seldom find the true value of life until they are faced with death.”” p. 59

“You must believe that your quest can be successful, even if no one else does.” p. 80

“I didn’t want to mention I was a writer. (In many countries, “writer” means “journalist,” and journalists are treated with suspicion in places without a free press.” p. 83

Chris McCandless’ letter published in Into The Wild “The basic core og a man’s living spirit is his passion for adventure. The joy of life comes from out encounters with new experiences, and hence there is no greater joy than to have an endlessly changing horizon, for each day to have a new and different sun.” p. 85

“Do one thing every day that scares you.” (Eleanor Roosevelt) p. 87

Book: The Flinch by Julien Smith “breaking your programming requires a single moment of strength.” p. 97

“Documenting Your Quest… Keeping a scrapbook (either a traditional one or a digital one)” p. 99

“If you want to prioritize adventure but can’t find the time, something’s got to give.” p. 100

“I spent the better part of a week every December reviewing the year that had just passed and planning ahead for the next one. The quest to visit every country came about only after I spent a lot of time thinking through the logistics… The quest was successful because I’d thought it through–not in spite of it.” p. 108

Travel to every country in the world “I guessed that it would cost somewhere in the neighborhood of $30,000, and that it would take approximately five to seven years to complete.” p. 108

“How much time? How much money? What might those other variables be? Let’s figure it out.” p. 109

“Visit every country in Africa (the most challenging continent, containing more than 50 countries).” p. 110

“Since it would be a ten-year journey, I couldn’t stay excited on a daily basis by thinking about the finish line. That’s when subgoals proved helpful.” p.110

“Scott Young, who taught himself the four-year MIT computer science curriculum in one year, didn’t just jump into the project at first thought. “I spent nearly two months preparing the curriculum before starting my challenge,” he told me, “including a one-week pilot study with a single class… He considered the rest of the curriculum and visualized which parts would be more challenging. By the end og the pilot study, he felt his head was in the game and that he was ready to strike out on the full, yearlong commitment.” p. 112

“Always keep Ithaca on your mind.
To arrive there is your ultimate goal.
But do not hurry the voyage at all.
It is better to let it last for many years;
and to anchor at the island when you are old,
rich with all you have gained on the way,
not expecting that Ithaca will offer you riches.” p. 115

“I then set a number of goals based on specific categories. Your own categories may vary, but some of mine include:
Writing
Business
Friends and Family
Service
Travel
Spiritual
Health
Learning
Financial (Earning)
Financial (Giving)
Financial (Saving)” p. 116

“If you’re predisposed to overthink, the answer is simple: Just do it.” p. 119

“His best advice has now been simplified: “Pick a departure date. Start saving. Get a bike, tent, and sleeping bad. And go.”” p. 119

“All students sign a pledge to speak only the new language they are learning for the entire time they are there, including evenings and weekends.” p. 119

To pursue your goal: “Get specific. Be sure to clearly understand the time, money, and other costs before you begin.” p. 121

The Personal Annual Reports of Nicholas Felton “This project is more about recording than influencing behavior. As Nicholas explained, when he started compiling the information each year, he felt inspired to “say yes” to activities he might normally decline.” p. 125

“If your primary goal is to write a book, produce a documentary, or otherwise publicize your quest, maybe it’s more of a career move. There’s nothing wrong with doing something for your career–but it’s not really a quest, since a quest requires sacrifice and uncertainty.” p. 128 [contradictions by the author? his own personal definition of quest]

“If you set specific goals, you’ll know exactly when you’ve accomplished them.” p. 133

“As much as possible, you should also ignore fear when you write your life list. Fear of failure, and even the fear of success, holds us back from attempting many of the things we secretly wish for.” p. 133

“These people are all about making things and sharing them with the world, over and over.” p. 151

Seth Godin: “The lesson, as he explains it: “If I fail more than you do, I win. Built into this notion is the ability to keep playing. If you get to keep playing, sooner or later you’re gonna make it succeed.” p. 155

Elise Blaha “She clearly defines her projects, and she breaks them down into multiple parts. When she has success with one project she applies the same format to others. The medium doesn’t need to be the same, she told me, but the process for working on them can still be…One autumn she baked forty different kinds of bread.” p. 158

Seinfeld told the New York Times. “I read an article a few years ago that said when you practice a sport a lot, you literally become a broadband: the nerve pathway in your brain contains a lot more information. As soon as you stop practicing, the pathway begins shrinking back down.” p. 162

“When I woke up in the morning I immediately thought about what I’d work on for the next few hours. At night I’d go to bed thinking about how I could improve the next day.” p. 163

John and Nancy Vogel and their twin boys: Alaska to Argentina on a bike “They were especially motivated by the goal of becoming the youngest travelers to cross the America’s by bicycle. An improvised rule specifying “twenty miles per cookie” didn’t hurt, either.” p. 172

****Steven Pressfield: “The most important thing about art is to work. Nothing else matters except sitting down every day and trying.” p. 196

“Juno Kim… originally took her savings with her and planned to live off that money as long as it lasted. But four years and twenty-four countries later, she’s actually increased her savings, thanks to her work as freelance writer and photographer.” p. 200

Ron Avitzur (graphing calculator) “I wasn’t a big spender… But it also helped that we worked all the time.” p. 200

“If you’re going to do something outlandish, there are a probably a lot of people who would like to do it, too, but don’t for various reasons.” p. 201

“How long will it take me to save this amount of money?
Is there any other way to get the money (crowdfunding, selling something, extra work…?
Do I need to wait to start until I have all the money?
If getting the money will be difficult, is there a wat to reduce the cost?” p. 204

“John Lasseter, one of the founders of Pixar, says that “Every one of our films was the worst motion picture ever made at one time or another.” … As soon as they identify the mistakes, they’re able to fix them–but the point is to not shy away from the initial failure.” p. 213

“some people are simply obsessed with failure–or at least they have a general expectation that a new project will more likely meet with failure than success.” p. 214

“Regret is what you should fear the most. If something is going to keep you awake at night, let it be the fear of not following your dream. Be afraid of setting.” p. 220

“If you’re going to worry about something, worry about the cost of not pursuing your dream.” p. 222

Nate Damm “I’m definitely not motivated by achievement. I just do what I like every day, and good things seem to happen as a result.” p. 228

Once Upon a Galaxy by Josepha Sherman

The Phantom Tollbooth by Norton Juster

John Stuart Mill and the “fleeting sense of happiness” “Suppose that all your objects in life were realized… the whole foundation on which my life was constructed fell down. All my happiness was to have been found in the continual pursuit of this end. The end had ceased to charm, and how could there ever again be any interest in the means? I seemed to have nothing left to live for.” p. 249-250

Shannin O’Donnell “At that moment I blamed the very idea of my aimless wandering for my illness, but as I healed I realized that the illness was a setback, not a sign that I was on the wrong path.” p. 253

From the poem Ithaca “To arrive there is your ultimate goal, but do not hurry.” p. 259

Phoebe Snetsinger “It has become ever more clear to me that if I had spent my life avoiding any and all potential risks, I would have missed doing most of the things that have comprised the best years of my life.” p. 263

“The support and understanding of others will vary. It doesn’t matter what anyone else thinks about your quest, but if you don’t have sufficient motivation to see it through, it will be tough going.” p. 268

“If you measure success by the opinions of others, you’re effectively set yourself up for failure.” p. 269

****** About the Author: “Someone who will work twenty-four hours a day for themselves to avoid working one hour a day for someone else.” p. 293

“Script #4: Everyone should work 35 to 40 hours a week, mostly in the office, usually on the same days and times (even though research shows that this is largely and unproductive schedule for most people).” p. 306

“Richard Branson put it best: “Business opportunities are like buses. There’s always another one coming.” p. 307

Tony Bennett- “Life teaches you how to live it, if you live long enough.”

Tumbélé! Biguine “Afro and Latin Sounds from the French Caribbean, 1963-74

Read Variety article Charlie Kaufman on Indie Filmmaking: ‘I Have to Have One Commercial Success’

To read Bobby Kennedy: The Making of a Liberal Icon by Larry Tye