“He never went turtle-ing. That is what kills the eyes.” p. 6 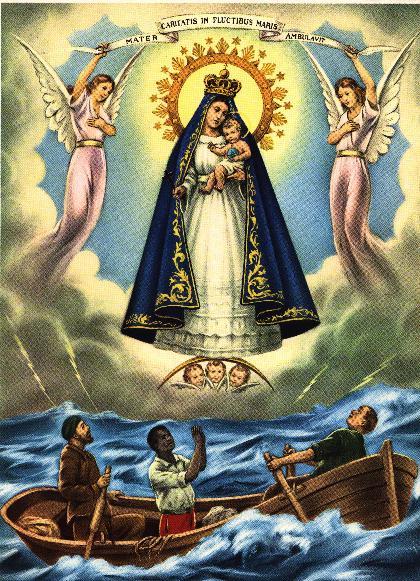 Virgen del Cobre (Our Lady of Charity) via wikipedia

Virgen del Cobre
“Once there had been a tinted photograph of his wife on the wall but he had taken it down because it made him too lonely to see it and it was on the shelf in the corner under his clean shirt.” p. 8

“The old man’s head was very old though and with his eyes closed there was no life in his face.” p. 10

“and he thought, the birds have a harder life than we do except for the robber birds and the heavy strong ones.” p. 21

“Most people are heartless about turtles because a turtle’s heart will beat for hours after he has been cut up and butchered.” p. 28

“you down there six hundred feet in that cold water in the dark.” p. 33.

“He knew what a huge fish this was and he thought of him moving away in the darkness with the tuna held crosswise in his mouth.” p. 35.

“But a cramp, he thought of it as a calambre, humiliates oneself especially when one is alone.” p. 53

But, thank God, they are not as intelligent as we who kill them; although they are more noble and more able.” p. 55.

“I wish I was the fish, he thought, with everything he has against only my will and my intelligence.” p. 56

“A flying fish is excellent to eat raw and I would not have to cut him up.” p. 57

“a great island of Sargasso weed that heaved and swung in the light sea as though the ocean were making love with something under a yellow blanket” p. 64

“There is no one worthy of eating him from the manner of his behaviour and his great dignity.” p. 67.

“And now he has jumped more than a dozen times and filled the sacks along his back with air and he cannot go down deep to die where I cannot bring him up.” p. 75.

“He did not even watch the big shark sinking slowly in the water, showing first life-size, then small, then tiny. That always fascinated the old man.” p. 103

Embarcadero and The Piers 56

Downtown and The Financial District 66

Levis Strauss and the gold rush 71

To Eat and Drink:

To eat:
Heart of The City Farmer’s Market 94

Museum of Craft and Folk Art 106

To Eat and Drink:

Victorian houses and other styles 145

Japamtown, the Filmore and Pacific Heights 156