See The Garden of Earthly Delights by Hieronymus Bosch

made yolo and choco

“-Pity is the feeling which arrests the mind in the presence of whatsoever is grave and constant in human sufferings and unites it with the human sufferer.” p. 198

“-The tragic emotion, in fact, is a face looking two ways, towards terror and towards pity, both of which are phases of it. You see I use the word arrest. I mean that the tragic emotion is static. Or rather the dramatic emotion is. The feelings excited by improper art are kinetic, desire and loathing. Desire urges us to possess, to go to something; loathing urges us to abandon, to go from something. The arts which excite them, pornographical or didactic, are therefore improper arts. The esthetic emotion (I use the general term) is therefore static. The mind is arrested and raised above desire and loathing.-” p. 199

“The long slender flattened skull beneath the long pointed cap brought before Stephen’s mind the image of a hooded reptile. The eyes, too, were reptilelike in glint and gaze. Yet at that instant, humbled and alert in their look, they were lit by one tiny human point, the window of a shrivelled soul, poignant and self-enbittered.” p. 200

“Beauty expressed by the artist cannot awaken in us an emotion which is kinetic or a sensation which is purely physical. It awakens, or ought to awaken, or induces, or ought to induce, an esthetic stasis, an ideal pity or an ideal terror, a stasis called forth, prolonged and at last dissolved by what I call the rhythm of beauty.-” p. 200

“-Art-said Stephen-is the human disposition of sensible or intelligible matter for an esthetic end.” p. 201

“though the same object may not seem beautiful to all people, all people who admire a beautiful object find in it certain relations which satisfy and coincide with the stages themselves of all esthetic apprehension. These relations of the sensible, visible to you through one form and to me through another, must be therefore the necessary qualities of beauty.” p. 203 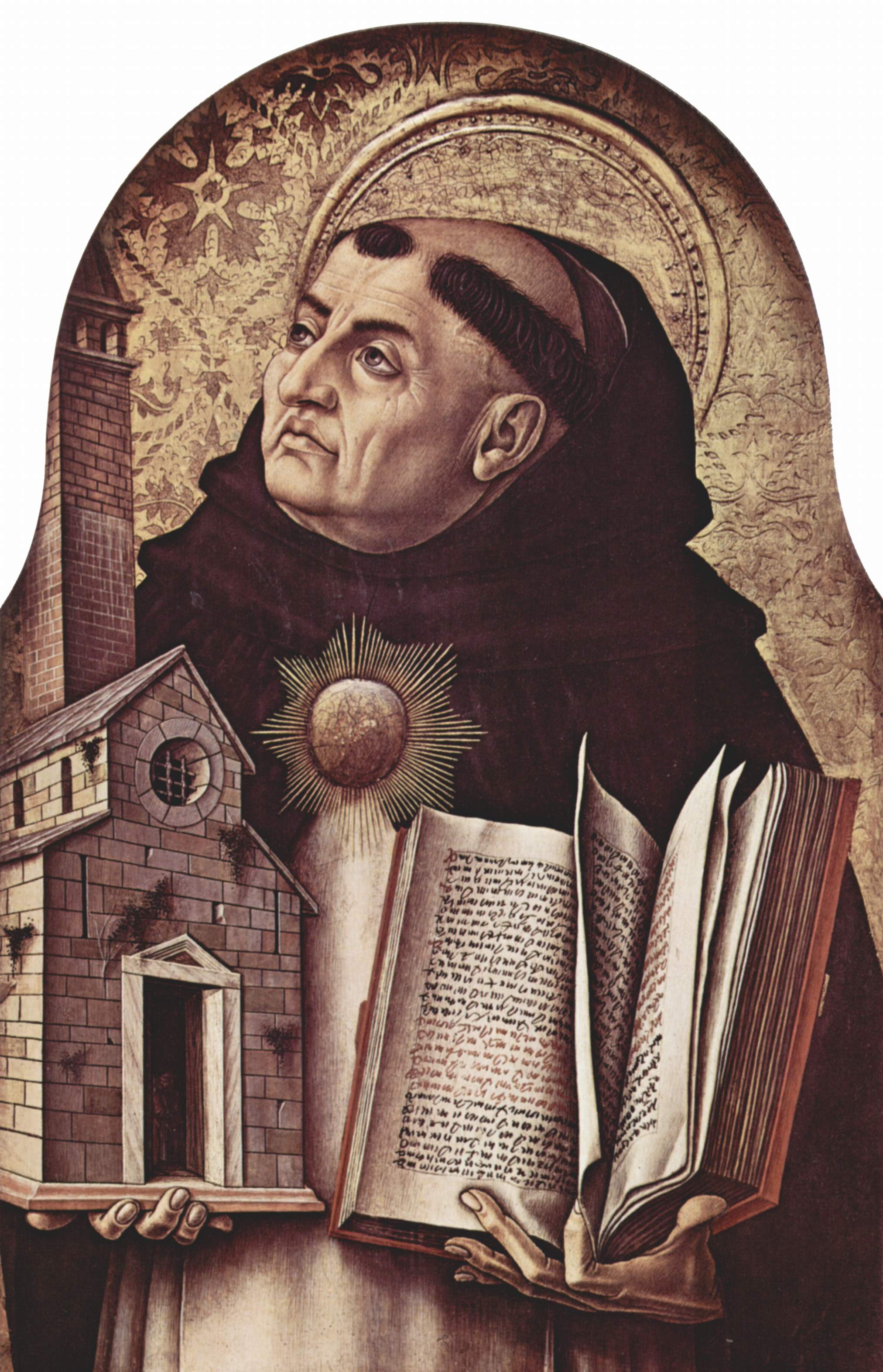 An altarpiece in Ascoli Piceno, Italy, by Carlo Crivelli (circa 1435–circa 1495) – The Yorck Project: 10.000 Meisterwerke der Malerei. Via Wikimedia.

****”Aquinas says: Ad pulcritudinem tria requiruntur integritas, consonanita, claritas. I translate it so: Three things are needed for beauty, wholeness, harmony and radiance. Do these correspond to the phases of apprehension? … You see it as one whole. You apprehend its wholeness. That is integritas… You apprehend it as complex, multiple, divisible, separable, made up of its parts, the result of its parts and their sum, harmonious. That is consonantia… he had in mind symbolism or idealism, the supreme quality of beauty being a light from some other world, the idea of which the matter was but the shadow, the reality of which it was but the symbol. I thought he might mean that claritas was the artistic discovery and representation of the divine purpose in anything or a force of generalization which would make the esthetic image a universal one, make it outshine its proper conditions… The radiance of which he speaks in the scholastic quidditas, the whatness of a thing. This supreme quality is felt by the artist when the esthetic image is first conceived in his imagination. The mind in that mysterious instant Shelley likened beautifully to a fading coal. The instant wherein that supreme quality of beauty, the clear radiance of the esthetic image, is apprehended luminously by the mind which has been arrested by its wholeness and fascinated by its harmony is the luminous silent stasis of esthetic please, a spiritual state very like to that cardiac condition which the Italian physiologist Luigi Galvani, using a phrase almost as beautiful as Shelley’s, called the enchantment of the heart.-” p. 206-207

“Here are some questions I set myself: Is a chair finely made tragic or comic? Is the portrait of Mona Lisa good if I desire to see it? Is the bust of Sir Philip Crampton lyrical, epical or dramatic? If not, why not?-
-Why not, indeed?-said Lynch, laughing.”

“The simplest epical form is seen emerging out of lyrical literature when the artist prolongs and broods upon himself as the centre of an epical event and this form progresses till the centre of emotional gravity is quidistant from the artist himself and from others. The narratice is no longer purely personal. The personality of the artist passes into the narration itself, flowing round and round the persons and the action like a vital sea. This progress you will see easily in that old English ballad Turpon Hero, which begins in the first person and ends in the third person. The dramatic form is reached when the vitality which has flowed and eddied round each person fills every personal with such vital force that he or she assumes a proper and intangible esthetic life. The personality of the artist, as first a cry or a cadence or a mood and then a fluid and lambent narrative, finally refines itself out of existence, impersonalizes itself, so to speak. The esthetic image in the dramatic form is life purified in and reprojected from the human imagination. The mystery of esthetic like that of material creation is accomplished. The artist, like the God of creation, remains within or behind or beyond or above his handiwork, invisible, refined out of existence, indifferent, paring his fingernails.-” p. 208-209

“A fine rain began to fall from the high veiled sky and they turned into the duke’s lawn, to teach the national library before the shower came… ‘No wonder the artist retired within or behind his handiwork after having perpetrated this country.-” p. 209

“something that is not there at the outset but reveals itself slowly, and then completely, having traveled an arduous route during which vision and image come together,”

“By the time the gas station appears on canvas in its final form it has ceased being just a gas station. It has become Hopperized. It possesses something it never had before Hopper saw it as a possible subject for his painting. And for the artist, the painting exists, in part, as a mode of encountering himself.”

“With the uncertainty under which the painter labors, extended periods of doubt, it is a wonder that he can ever be free of anxiety or finish a work. Even the prodigiously talented Picasso needed constant reassurance. ¶ One of the ways Hopper dealt with his lack of certainty was to make many preparatory drawings for each painting;”

“It was not that he needed to be sure how to paint a sugar dispenser of salt shaker as in Nighthawks (1942), but that they should become his. ¶ This absorption of the outer world into his inner world could only be accomplished through a protracted ritual of drawing and redrawing, slight adjustments here and there adding up to imaginative ownership and psychic freedom.”

“Again and again, words like “loneliness” or “alienation” are used to describe the emotional character of his paintings.”

“It was thrilling to suddenly go underground, travel in the dark, and be delivered to the masses of people milling about in the cavernous terminal.”

Nighthawks (1942) [at Art Institute of Chicago]

“The golden section rectangle is unique in that when subdivided its reciprocal is a smaller proportional rectangle.” p. 25 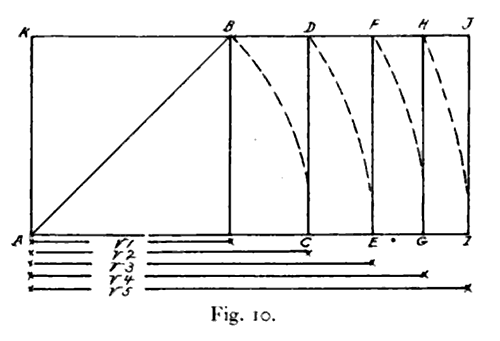 “Root 2 rectangles possess the special property of being endlessly subdivided by proportionally smaller rectangles. It is for this reason that the root 2 rectangle is the basis for the European DIN (Deutsche Industrie Normen), a system of paper sizes.” p. 36

Lacey Davis Caskey – Geometry of Greek Vases: Attic Vases in the Museum of Fine Arts Analysed According to the Principals of Proportion Discovered by Jay Hambidge. Via Wikimedia

See The Modulor by Le Corbusier

Le Corbusier: “the composition of of works of art is governed by by rules; these rules may be conscious methods, pointed and subtle, or they may be commonplace rules, tritely applied. They may also be implied by the creative instinct of the artist, a manifestation of an intuitive harmony,”  p. 43 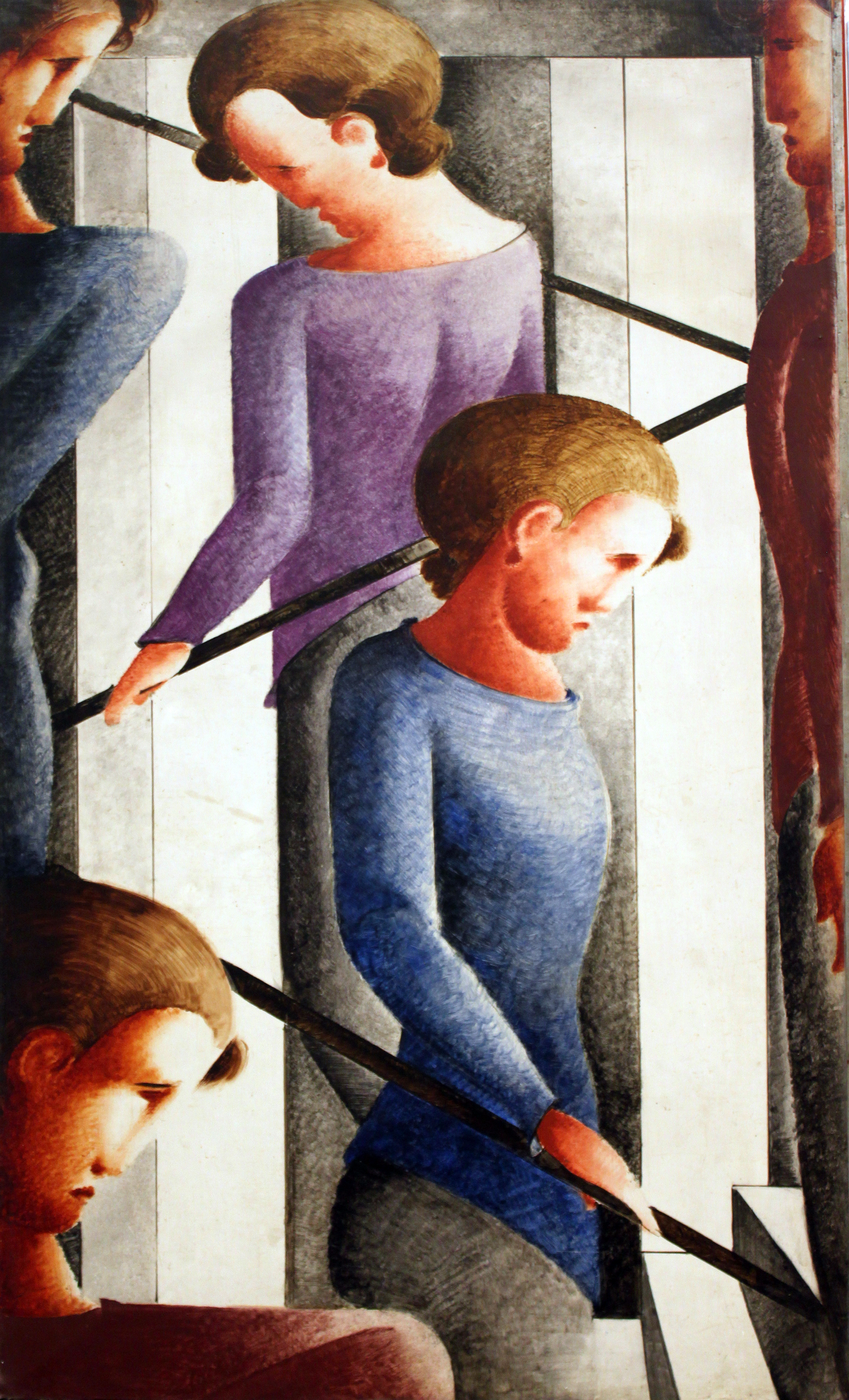 Designed by Tom Purvis and believed to feature his son with a Meccano. Via Wikimedia. 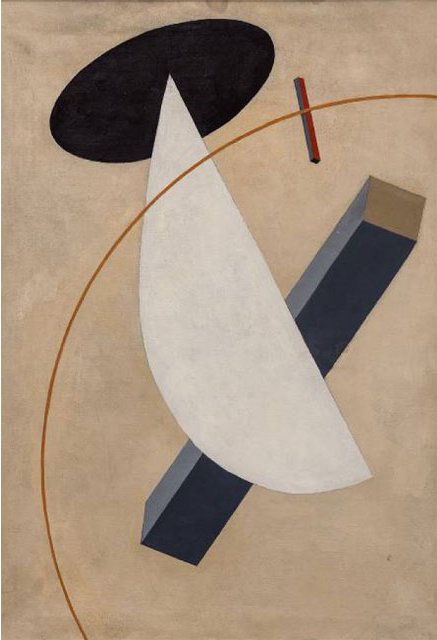 “The regulating lines do not bring in any poetic or lyrical ideas; they do not inspire the theme of the work; they are not creative; they merely establish a balance.” p. 101.

“Biology, geometry, and art are taught as separate subjects. The content area of each that is congruent to the other is often neglected and the student is left to make the connections on their own. In addition, art and design are commonly viewed as intuitive endeavors and expressions of personal inspirations.” p. 101 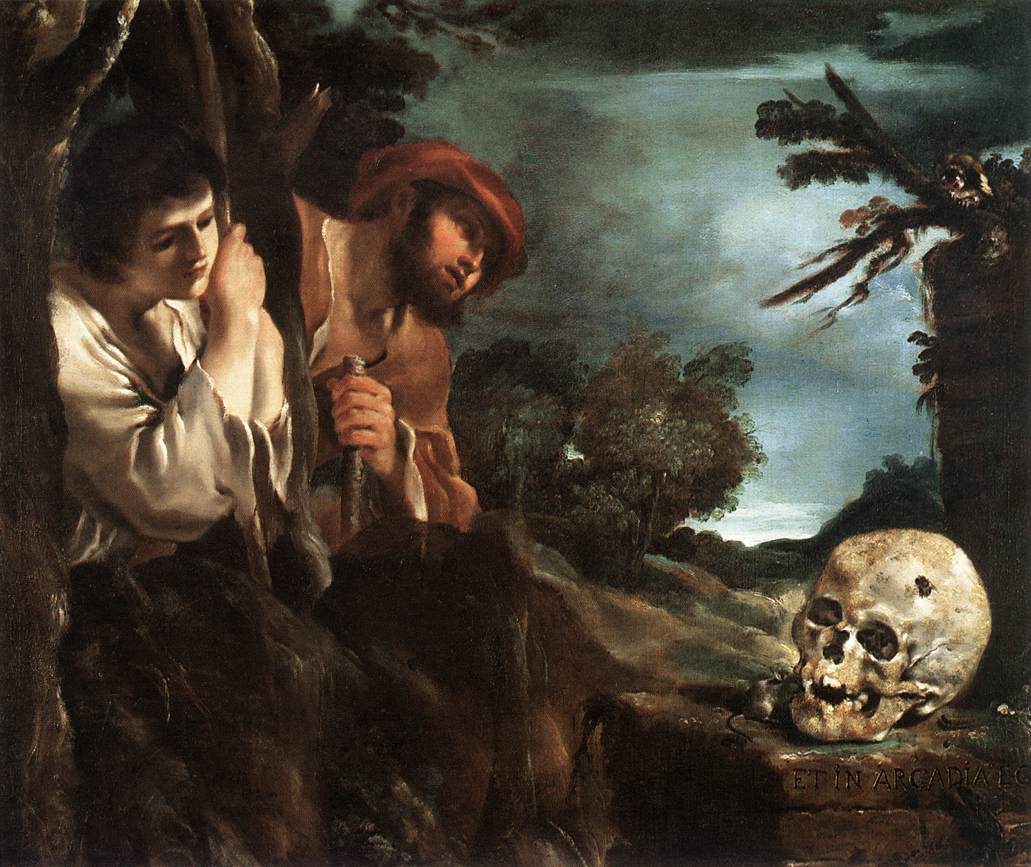 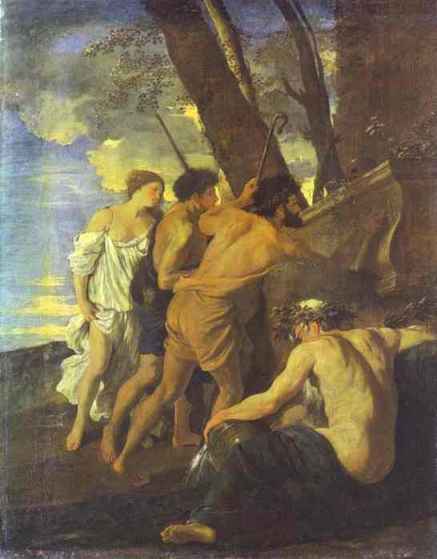 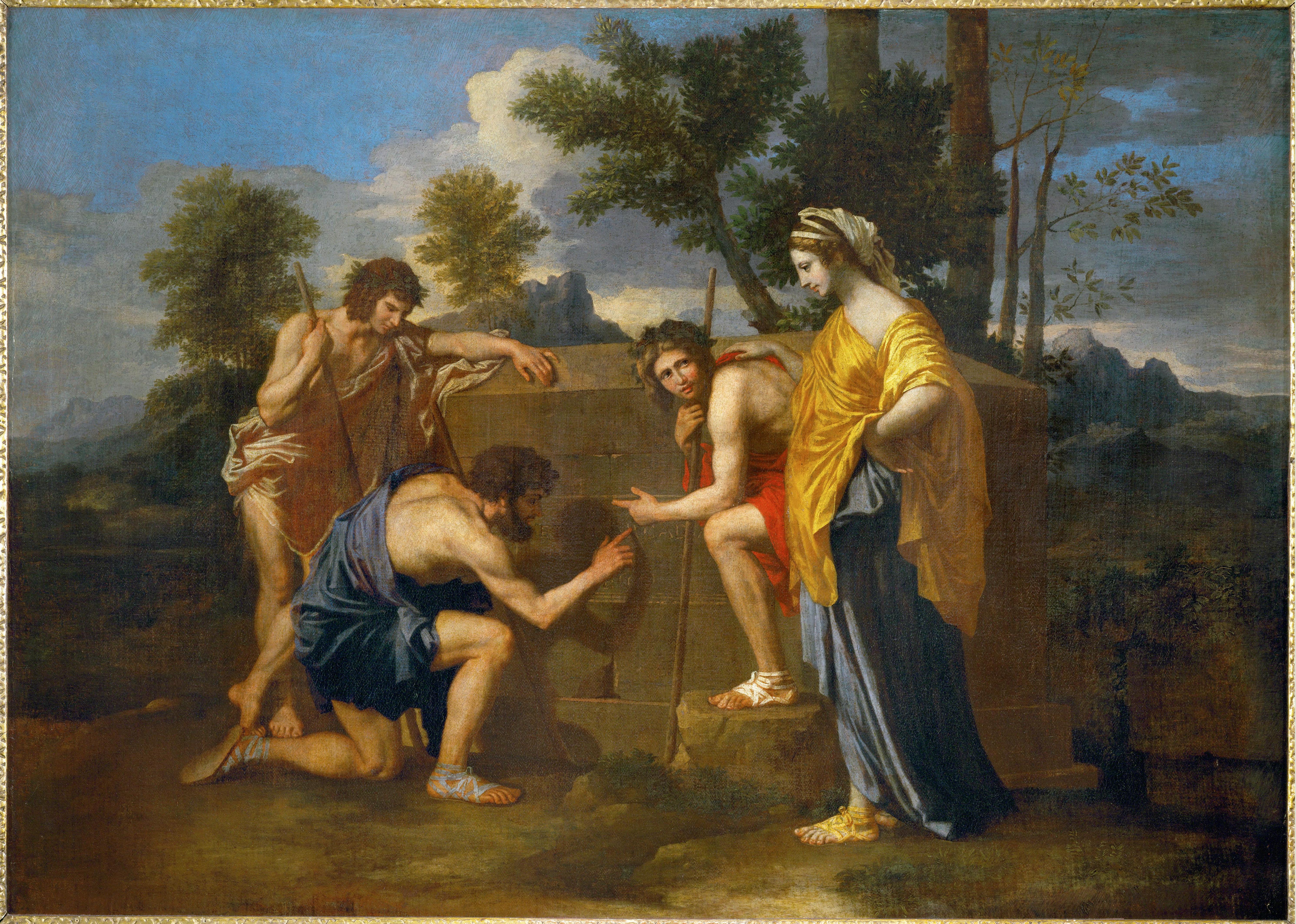 Interpretation of the phrase and paintings:

“The most important difference between the two versions is that in the latter version, one of the two shepherds recognizes the shadow of his companion on the tomb and circumscribes the silhouette with his finger. According to an ancient tradition (see Pliny the Elder, nat. Hist. XXXV 5, 15), this is the moment in which the art of painting is first discovered. Thus, the shepherd’s shadow is the first image in art history. But the shadow on the tomb is also a symbol of death (in the first version symbolized by a skull on the top of the tomb). The meaning of this highly intricate composition seems to be that, from prehistory onward, the discovery of art has been the creative response of humankind to the shocking discovery of mortality. Thus, death’s claim to rule even Arcadia is challenged by art […] In the face of death, art’s duty—indeed, her raison d’être—is to recall absent loved ones, console anxieties, evoke and reconcile conflicting emotions, surmount isolation, and facilitate the expression of the unutterable.” * Wikipedia. 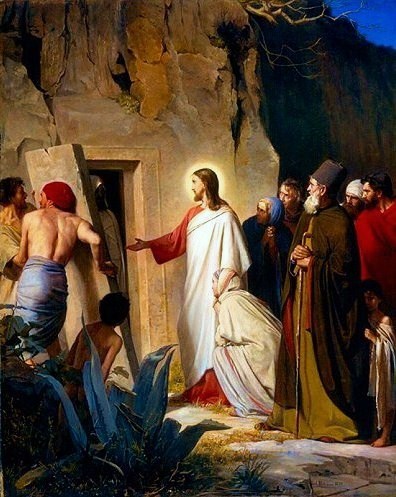 The Raising of Lazarus, 1857, Léon Joseph Florentin Bonnat. Via wikimedia. 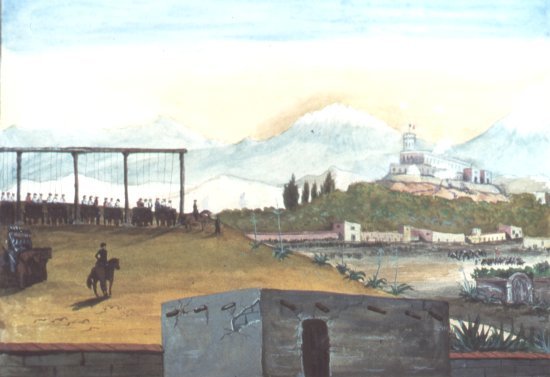 The mass hanging of San Patricios via wikimedia.

Read Samuel Chamberlain‘s My Confession: Recollections of a Rogue.

Et In Arcadia Ego is the name the Judge has given to his rifle in Blood Meridian. In the book, the Judge copies and destroys an ancient rock painting he finds while crossing the desert.

On the origin of painting and drawing through shadow. Blog.

Read essay In Praise of Shadows by Tanizaki.

Found it while listening to The Man In The High Castle.
http://en.m.wikipedia.org/wiki/Wabi-sabi