Mamet, David. Bambi vs. Godzilla: On the Nature, Purpose, and Practice of the Movie Business. Kindle Edition. 2007.

“The commissar gets her thrill not from the film but from the power to admonish.” location 699

real filmmakers “Will they fail? Certainly. Both artistically and commercially. But (a) they have no other choice and (b) realizing that their final choices must be essentially subjective, they may learn to trust their instincts. Also (c) they’ll have more fun.”  location 702

“Like any human endeavor, like you and me, they have inevitably been exposed to and have, in the main, submitted to the power of self-corruption, of self-righteousness, to the abuse of power. But like General della Rovere, like you and me, like the studio executives, they possess the possibility of beauty and, hence, for human transformation: not as preaching, not as instruction, not as doctrine—all of which, finally, are out of place in the cinema and can awaken, at best, but self-righteousness.” location 740

“The garbage of exposition, backstory, narrative, and characterization spot-welds the reader into interest in what is happening now. It literally stops the show.” location 866

***”When the film turns narrative rather than dramatic, when it stands in for the viewer’s imagination, the viewer’s interest is lost.” location 1040

***”The writer may choose to supply stock, genre, or predictable answers to the magic questions, and the drama will be predictable and boring. The writer will have saved himself the agony of indecision, self-doubt—of work, in short—and so, of course, will the protagonist.” location 1230

“The gags, here, happen to be identical to Aristotle’s “incidents,” that is, those occurrences without which the plot cannot move forward.” location 1391

***”Our ability to conceptualize about both the process and the product is accompanied, and inspired, by the pure animal joy of submersion in a mystery.”  location 1653

“Wisdom, therefore, lies not in the phenomonological question “What does a duck look like?” but, rather, in the practical “What is a duck looking for?”” location 1658

“Well, the poor man, unhampered by the capacity to waste, was forced to employ thought, and he wondered: What does a duck like? How does a duck see?” location 1678

“We have all had the experience of saying of a statue, “How lifelike,” and, of a life mask, cast from the human form and painted to perfection, “How lifeless.”” location 1679

“For the actual human being and the actual duck were created by, and so contain, a mystery. They cannot be reduced to mere measurements, and all attempts to do so (whether through the caliper of the decoy maker or through the audience testing of the social scientist) result in lifeless parody.” location 1681

“Jewish rabbinical tradition notes that adultery is like murder, for it is a crime that cannot be undone. Violation of the aesthetic distance is a rupture of the artist’s compact with the audience, and, similarly, its rupture cannot be mended.” location 1790

***”the difference between enjoyment and stimulation. One leaves the ballet feeling refreshed, as a promise has been fulfilled. One quits the video-game or pornographic film feeling empty and vaguely debauched—for one has only been stimulated. The brain, here, craves a repetition of the stimulation, as with any drug.” location 1833

“One may sit in front of the television for five hours, but after King Lear one goes home.” location 1835

*****”violence—their belligerence masks their fear and displays their ignorant belief that battles are somehow won by intimidation.” location 1894

“Violent encounters are won only by those putting themselves at risk of violence.” location 1895

“Aristotle cautions that it is insufficient for the hero to get the idea. Many modern moviemakers, however, act as if they hadn’t read his book. Their films depict the gentle progress of the protagonist toward self-actualization—usually depicted as a slow, arms-extended twirling on a beach (as if the expression of a racial memory of our descent from the shipworm). location 2040

“These men, and their performances, are characterized by the absence of the desire to please.” location 2055

“On screen, they don’t have anything to prove, and so we are extraordinarily drawn to them. They are not “sensitive”; they are not antiheroes; they are, to use a historic term, “he-men.” location 2056

“But consensus is, of course, the dead opposite of that subjectivity that is the essence of the theatrical experience.” location 2385

*******”And so, now firmly self-understood as part of a jury, he utters the phrase that is the foundation of society and the death of art: “What do you think?” Consensus, enshrined as right thinking, ensues, and the stage is set for mediocrity.” location 2400

“They are lost in the wilderness and prefer, as might you or I, a broken compass to no compass at all.” location 2449

“They who lack talent expect things to happen without effort.” location 2546

“A long fan of light ran out from the east and the rising sun swelled blood red along the horizon.” (location 1285)

“I dont believe in signing on just till it quits suitin you.” (location 2323)

“and a thin white dog who seemed to have been awaiting just such an arrival came over and urinated for a long time against the rear tire of the truck and went back.” (location 2609)

“That all courage was a form of constancy. That it was always himself that the coward abandoned first. After this all other betrayals came easily.” (location 3508)

“as he rode he talked to it and told it things about the world that were true in his experience and he told it things he thought could be true to see how they would sound if they were said.” (location 3609)

“repeated what his father had once told him, that scared money cant win and a worried man cant love.” (location 3683)

“walls where the first lamps were lit, the narrow spires of smoke standing vertically into the windless dawn so still the village seemed to hang by threads from the darkness.”  (location 3837)

“sleep he dreamt of horses and the horses in his dream moved gravely among the tilted stones like horses come upon an antique site where some ordering of the world had failed and if anything had been written on the stones the weathers had taken it away again and the horses were wary and moved with great circumspection carrying in their blood as they did the recollection of this and other places where horses once had been and would be again.” (location 4187)

“They sat very quietly. The dead moon hung in the west and the long flat shapes of the nightclouds passed before it like a phantom fleet.”  (location 4469) 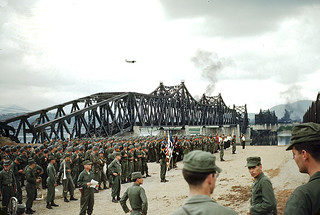